These common childhood diseases are unavoidable. EVERY child will eventually encounter them at some point in their life.

Sometimes the symptoms like fever, diarrhea, and rash are severe, sometimes they are quite mild. Parents may not even know their child has been exposed, as children may even be asymptomatic, yet still infectious.

Parents can minimize the severity of disease with routine vaccination when available, and limit the frequency of infections by teaching children to “cough into elbows” and by practicing good hand-washing technique with old-fashioned soap and water.

The most common childhood diseases range from viral diseases which occur quite frequently (like colds and flu), to viral infections that may occur only once in a lifetime (like roseola and slap-cheek).

Bacterial infections (like ear infections and strep throat) may require antibiotic treatment, and one of the most severe childhood diseases Rotavirus, is the most frequent cause of childhood diarrhea.

Anxious parents should try to remember that illness is a normal part of childhood.

Common colds are viral infections characterized by runny nose, and only a small amount of coughing.

The average American adult catches 2-4 colds per year, and young children catch many, many more!!

As children get older, their bodies will develop immunity to lessen the frequency and severity of colds.  But until then, you can expect MANY colds…..so stock up on tissues!

What causes a Cold?

Over 100 different viruses can cause the cold.  That’s why a cold is difficult to prevent and so very common!

How do you know if it’s only a cold?

Children may feel miserable, but it’s probably just a cold if they do not have fever, chills, or other symptoms.

If your child has only the following, it’s probably just a cold:

How can you prevent and treat the cold?

Frequent handwashing and coughing into elbows can help prevent the spread of the cold.  Wipe noses, and discard used tissues.

Most symptoms of a cold disappear within 3-4 days. Salt water nose drops, humidifiers, and lots of fluids can help relieve the symptoms of colds. 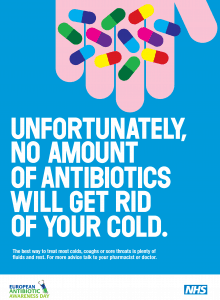 Children and adults will develop influenza several times throughout their lifetime. Most pediatricians recommend a yearly flu shot to prevent serious complications related to the flu.

What is the Influenza?

Influenza is a fancy word for “Flu.”  While many viruses cause colds, only three major types of viruses cause influenza:  Type A, Type B, and Type C.

How do you know if you have the flu?

Sometimes the flu is confused with a common cold. You’ll know the difference because it comes on a lot faster and the symptoms are worse.

If your child has the following, they may have the flu:

This symptoms are typically milder in vaccinated children.

How can you prevent the flu?

Yearly vaccination helps limit both the severity and the frequency of the flu.  Since the flu changes every year, children and adults should receive yearly vaccinations.

Each year researchers pick the three  flu viruses (strains) that are most likely to attack. Children can still get the flu even if vaccinated, but if they do the symptoms won’t be so bad and it will go away faster.

The flu can be deadly.  In 2013, 100 children died in the United States due to influenza,and over 200,000 people were hospitalized due to severe flu symptoms. The vast majority of deaths and hospitalizations had not been vaccinated.

Croup is an infection which causes the vocal chords and trachea (windpipe) to swell up, resulting in a distinct barking-like cough.

Most cases of croup are caused by parainfluenza virus (about 75%), although there are many other viruses, and even some bacteria, which can trigger croup.

Almost all children will experience croup, although many have such mild symptoms that it appears simply as a common cold.

Croup with stridor (difficulty breathing) affects about 15% of children, and usually occurs between the ages of 6 months and 6 years, although it may still occur in older children.  Children with asthma are particularly susceptible for more severe bouts of croup.

How do you know if you have croup?

Croup usually begins as a small cold, but then children experience dry, barking-like coughing during the night.

If your child has the following symptoms, they may have croup:

How do kids catch croup?

There’s no vaccine for croup yet, but scientists are working on one. Meanwhile, keep your hands clean and get the flu shot every year, as it may help lessen croup severity.

How is croup treated?

Using a humidifier in a child’s room at night, steamy showers, or sitting out in the cool night air may all help lessen croup symptoms and help a child breathe easier.

The second night of croup symptoms are usually more severe, so speak with your pediatrician immediately if you suspect your child has croup.  Your doctor may recommend a steroid injection, or inhaler to help children who are experiencing difficulty breathing. Steroid treatment decreases the swelling of the throat if given early during severe croup.

Slapped cheek syndrome is a fairly mild disease caused by a virus called parvovirus. It is spread in the same way as the cold or flu.

How do you know if you have slap-cheek?

If your child has the following symptoms, they may have slap-cheek:

It’s very difficult to prevent the spread as children are most contagious before their symptoms begin, so parents are unaware their child is even infected. Children who have already had slap-cheek are immune to getting slap-cheek again.  You only get it once in a lifetime!
[sc:inlinead ]

Children usually only develop Roseola once in their lifetime, usually between infancy and two years old, developing immunity to further exposure.

The high fever is the most difficult part of roseola, as the rash is typically not uncomfortable.  For many parents, this maybe their child’s first high fever.

Management should include fever-reducers such as Children’s Tylenol or Advil, and keeping children cool and well-hydrated.

How do you know if you have Roseola?

Roseola begins with a sudden very high fever between 102-105F degrees (38.9C-40.5C) which lasts 3-7 days.  AFTER the fever returns to normal, children develop a spotty pink rash which lasts about 24hrs.  The key to diagnosis is that the rash appears AFTER the fever is gone.

If your child has the following symptoms, she may have Roseola:

How do prevent catching Roseola?

Roseola is highly contagious in children who have not previously had the disease.  Children are most infectious before they exhibit any symptoms, as the incubation period (the time between when a child is infected and when they demonstrate symptoms) is quite long, 7-14 days.  This makes it very difficult to prevent spreading.
[sc:inlinead ]

What is Hand, Foot, Mouth Disease?

Hand, Foot, Mouth Disease is caused by the coxsackie virus and usually affects children younger than 5 years old.  The hallmark of disease are painful, blister-like sores in the mouth, and a skin rash.

How do you know if you have Hand, Foot, Mouth disease?

If your child has the following, they may have Hand, Foot, Mouth disease:

Hand, Foot, Mouth is highly contagious and easily spreadable. Children are most infectious during the first week of disease, but are still contagious even when they do not exhibit severe symptoms, which makes limiting the spread very difficult.

Outbreaks in preschools are very common, simply due to the fact that children are first encountering this disease at this age.  All children will eventually encounter the virus.

How is Hand, Foot, Mouth treated?

There is no treatment for Hand, Foot, Mouth disease, except lots of fluids and over-the-counter pain medication (Tylenol).  The disease can last several weeks, with infectious virus remaining in the stool of children for up to a month!

Children may get dehydrated if they are not able to swallow enough liquids because of painful mouth sores.  Avoid spicy or hard foods which may aggravate mouth sores.

What is Strep Throat?

Strep Throat is a bacterial infection caused by bacteria known as group A streptococcus.  There are many reasons for a sore throat — and most sore throats are NOT due to strep.  However all children will eventually become exposed to strep, so parents should be aware of the symptoms.

How do you know if you have Strep Throat?

If your child has the following, they may have Strep:

How do kids catch Strep Throat?

Strep is highly contagious through saliva including water fountains, kissing, and shared kitchen utensils. Children infected with strep may spread disease even if they do not exhibit any symptoms.

How is Strep treated?

If a child has a positive lab test for strep, antibiotics are prescribed by a pediatrician.   After children start antibiotic treatment for 24hrs, they are no longer considered contagious.

Children infected with strep who do not receive antibiotics maybe contagious for several weeks, and children may even become re-infected after they discontinue treatment.

After the cold, ear infections are the most common illness of childhood.  75% of children will have their first ear infection before age 3, and many children have multiple infections per year!

What is an ear infection?

An ear infection is caused by bacteria or virus in the middle ear. This infection often follows another illness — cold, flu or allergy — that causes congestion and swelling of the nasal passages, throat and ear (eustachian) tubes.  Fluid becomes trapped inside the ear, resulting in ear pain.

How do you know if you have an Ear Infection?

If your child has the following, they may have an ear infection:

Should you treat an ear infection?

Many times, ear infections resolve on their own without treatment.  Children maybe given pain relievers, such as Children’s Tylenol or Advil, which helps control the ear pain while the infection resolves.

The American Academy of Pediatrics recommends a “Watch-and-Wait” period for a 48hrs before considering antibiotic treatment.  This gives the body time to heal on it’s own and helps minimize the unnecessary use of antibiotics, if the infection is non-bacterial.  Many ear infections are caused by viral infection and therefore are NOT treatable with antibiotics.

How many ear infections are too many?

Many children may have 2-3 ear infections per year which is an annoying, but normal part of childhood.  However, when children have ear infections multiple times a year, parents begin to question whether that’s too many and should tubes be considered.

In most cases, it’s not how many ear infections a child has, but rather what impact those infections are having on the child. Parents should monitor for hearing loss and speech delays, and if a young child has fluid in their ears for several months, pediatricians may recommend considering tube treatment surgery.

Almost every child will have Rotavirus before they are five years old! Rotavirus is the leading cause of diarrhea in children.

Rotavirus is a serious, severe illness.  Nearly 500,000 children worldwide die from rotavirus, including 20-60 deaths in the United States and over 60,000 US children hospitalized each year.

How do you know if you have rotavirus?

If you have the following symptoms, you may have rotavirus:

How does someone catch rotavirus?

Rotavirus is highly contagious and easily spread, especially in places where there are a lot of kids.

How do I stay safe and avoid getting rotavirus?

The best way to keep from catching Rotavirus is to wash your hands often. Wipe down light switches, toilet handles, and change hand towels frequently to prevent spreading to other family members.

Infants are typically given a vaccine (Rotarix, RotaTeq) to help reduce the severity of Rotavirus symptoms.  Make sure you speak with your child’s pediatrician.

How do you treat rotavirus?

Stay hydrated and drink lots of water. Children may benefit from an electrolyte solution, such as Pedialyte.  Avoid sugary drinks like juice which may make symptoms worse. 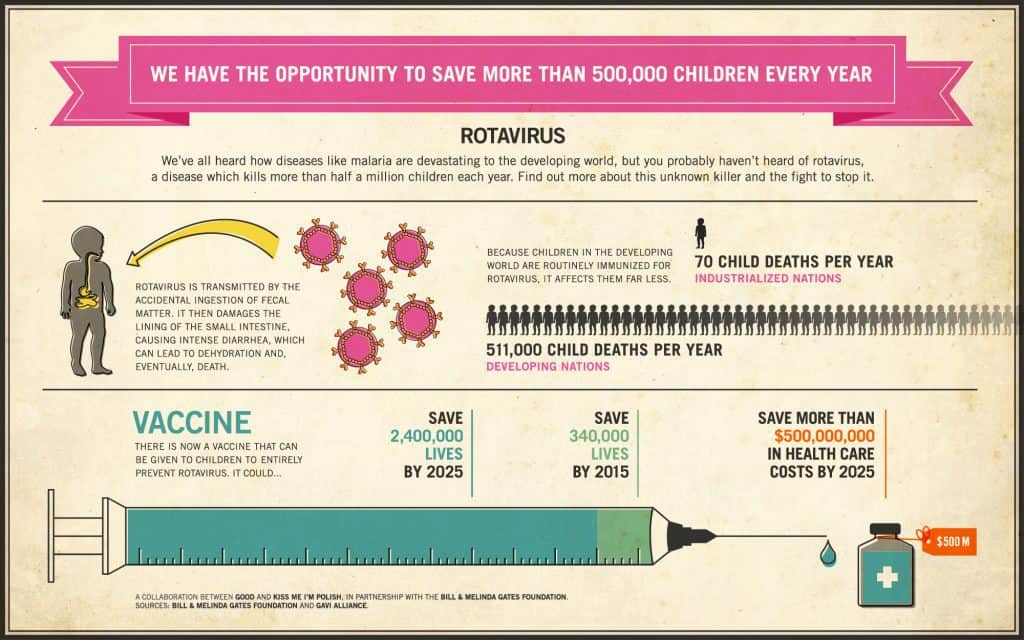 How to Know If a Child’s Fever is Serious

Should Parents Worry About the Enterovirus 68 Outbreak?