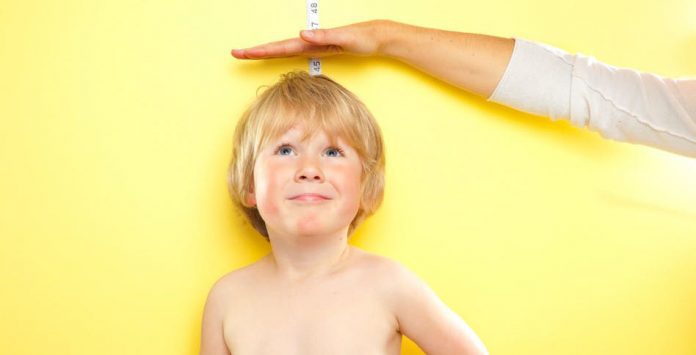 Boys enter puberty at bit later than girls, so when do boys reach their max height?  Well, it depends on the age a boy enters puberty, which can vary considerably depending on the individual. Boys stop growing when puberty ends.

When do Boys Stop Getting Taller?

Boys hit their maximum growth spurt about two years after puberty begins, generally getting their first period around 12 1/2 years of age.

Once they enter puberty, boys typically grow rapidly, reaching their full adult height by age 17 or 18.

However there is a very broad range of timing in which boys hit puberty-related growth spurts.  A boy entering puberty early will therefore stop growing earlier too.

Boys can enter puberty anywhere between ages of 8 and 13, and have a growth spurt between the ages of 10 and 14. During puberty, boys should maintain regular exercise and a balanced diet in order to ensure proper bone growth and development.
[sc:inlinead ]

Rate of Height Increase for Boys by Age Boys stop growing at around age 16-17 on average, though varies significantly based on the age they began puberty.

Signs of Puberty in Boys Tanner Stages of Puberty for Boys

While the Tanner stages give average ages of puberty development, there is significant variation among children and teenagers. Parents and teens shouldn’t worry if they reach a stage of puberty earlier or later.

The normal age puberty begins in boys can vary widely.

Tanner stage one: Before Puberty

This stage is often called pre-pubertal, meaning before the onset of puberty.

So Big! At What Age are Kids' Growth Spurts?

The Nonsense Botany of Edward Lear