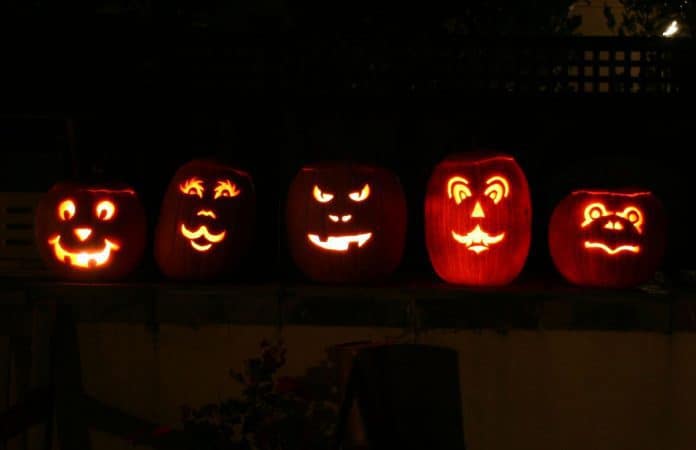 Remember the folk poem, the Five Little Pumpkins?  Fall into autumn with these classic poems about pumpkins every preschooler loves to learn!

Poems and Fingerplays About Pumpkins

The First One Said,
“Oh My, It’s Getting Late.”
(Hold up one finger, then put hands on cheeks with surprised expression.)

The Second One Said,
“There are Witches in the Air.”
(Hold up two fingers, then wave arms in air like wind.)

The Third One Said,
“But We Don’t Care!”
(Hold up three fingers, then put hands on hips, and shrug shoulders.)

The Fourth One Said,
“Let’s Run, and Run, and Run.”
(Hold up four fingers, then pretend you are running in place.)

The Fifth One Said,
“I’m Ready for Some Fun.”
(Hold up five fingers, then make silly expression.)

Then Whoosh! Went the Wind,
and Out! Went the Light.
(Close fingers in circle, then out to side jazz hands for whoosh motion.)

And the Five Little Pumpkins
Rolled Out of Sight.
(Roll arms in churning motion.)

Five Little Pumpkins Sitting By the Door.
I Gave One to My Mother, and Now There are Four.

Four Little Pumpkins, Such a Sight to See.
I Gave One to My Father, and Now There are Three.

Three Little Pumpkins, I Knew What to Do.
I Gave One to My Sister, and Now There are Two.

Two Little Pumpkins, Sitting in the Sun.
I Gave One to My Brother, and Now There is One.

One Little Pumpkin, Isn’t It Fun?
I’ll Give It to You, and Then I’ll Have None! 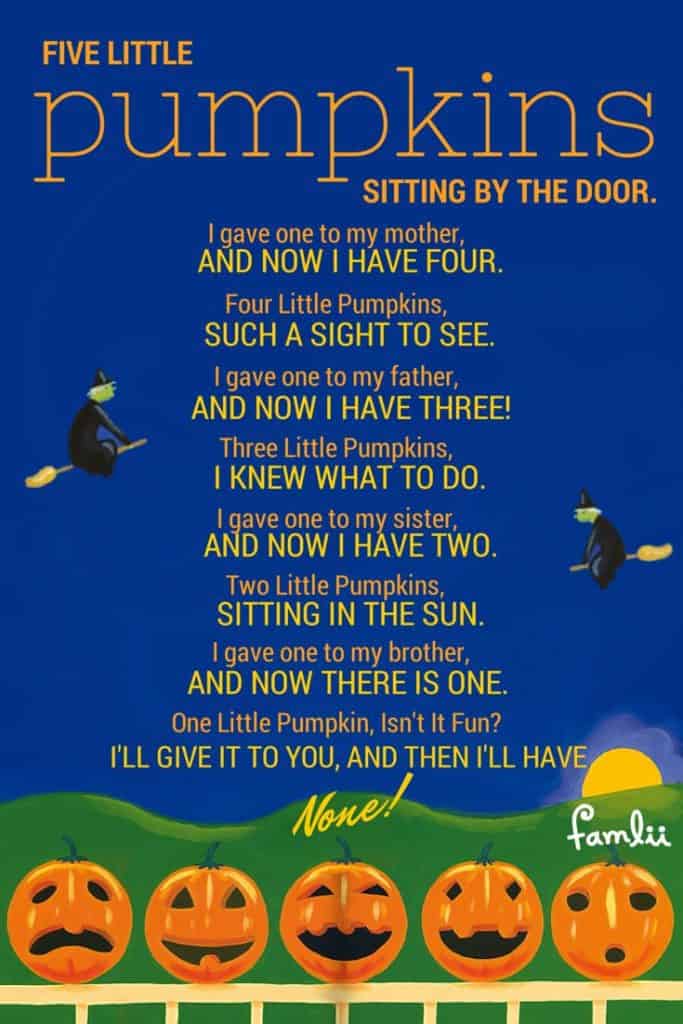 (Sung to the tune of “Twinkle, Twinkle, Little Star”; For Fingerplay, mime the planting of the seed, and use arms for big and round.)

Skills Every Dad Should Teach His Toddler

20 Funny Things that Freak Out Toddlers

Send this to a friend