The lullaby lyrics to Hush Little Baby, Don’t Say a Word will put a smile on the face of any exhausted parent.

Momma’s gonna buy you a WHAT?!? A Mockingbird? A Diamond Ring? Every parent can relate to the frustration of calming a tired child, and will resort to ANYTHING, including bribery, to get a baby to sleep. What are the Mockingbird Lullaby Lyrics?

And if that mockingbird don’t sing,
Mama’s gonna buy you a diamond ring.

And if that diamond ring turns brass,
Mama’s gonna buy you a looking glass.

And if that looking glass is broke,
Mama’s gonna buy you a billy goat,

And if that billy goat won’t pull,
Mama’s gonna buy you a cart and a bull.

And if that cart and bull turn over,
Mama’s gonna buy you a dog named Rover.

And if that dog named Rover won’t bark,
Mama’s gonna buy you a horse and a cart.

And if that horse and cart fall down,
You’ll still be the sweetest little baby in town.

Unlike many nursery rhymes and poems which originated in England, Hush, Little Baby is a traditional American lullaby, thought to have originated in the Southern United States. Like most American folk songs, the original author is unknown.

The song sings of the difficulties of quieting a baby, with the promise of all kinds of rewards to the child if he or she is quiet. Many parents create their own verses to the song, so get creative and make-up some lyrics of your own!! 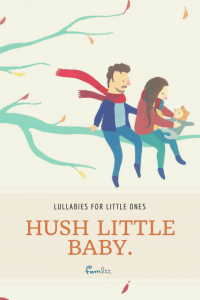 ‘Over the River’: The Children’s Thanksgiving Song

What Do I Call My Cousin’s Child?

Somewhere Over the Rainbow: A Hopeful Lullaby of Imagination

These Monday’s Child Coloring Pages are Not Sour and Sad

Should Parents Worry About the Enterovirus 68 Outbreak?

Send this to a friend