The Batman Smells song has several known versions, with the most common being variations to what happens after the “Batmobile loses it wheel”.  Check out these lyric versions below, or have some fun with your child and make up you own silly verse to the Jingle Bells song!

Jingle Bells, Batman Smells.
Robin laid an egg.
The Batmobile lost a wheel,
And the Joker got away!

What are the other verses to the Robin Lays an Egg Song?

The Batmobile lost it’s wheel, and…

What are the full lyrics to Jingle Bells Batman Smells?

Dashing through the snow
In a one-horse sloping sleigh
Joker’s on the go,
laughing all the way
The bells on Penguins ring
Make Riddler wanna fight
Two-Face wants to flip a coin
And sing this song tonight

Jingle bells, Batman smells
Robin laid an egg
Batmobile lost a wheel
And Joker got away 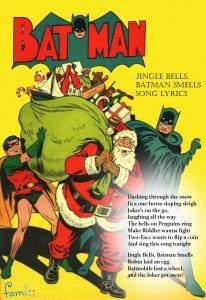 Check out these iconic videos featuring the Batman Holiday Song

Who can forget Bart Simpson singing Jingle Bells on the very first episode of the The Simpsons in 1989?  Of course, Batman smells in Bart’s version!

Don’t forget the retro Batman cartoon version from the ’90s, when Mark Hamil as the voice of the Joker, sings Jingle Bells.  Yes, the Joker does get away in this version!

And the Joker Did Ballet Version… 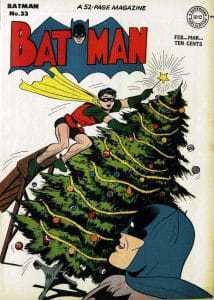 Fortnite Christmas Music for the Holidays