A fairy-tale song of believing in your heart, Lavender’s Blue, is a magical lullaby for your little prince or princess.  Here are the lyrics for Lavender’s Blue, and parents may already know the refrain, as Dilly Dilly, or Diddle Diddle.

Call up your friends, dilly, dilly
Set them to work
Some to the plough, dilly dilly,
Some to the fork 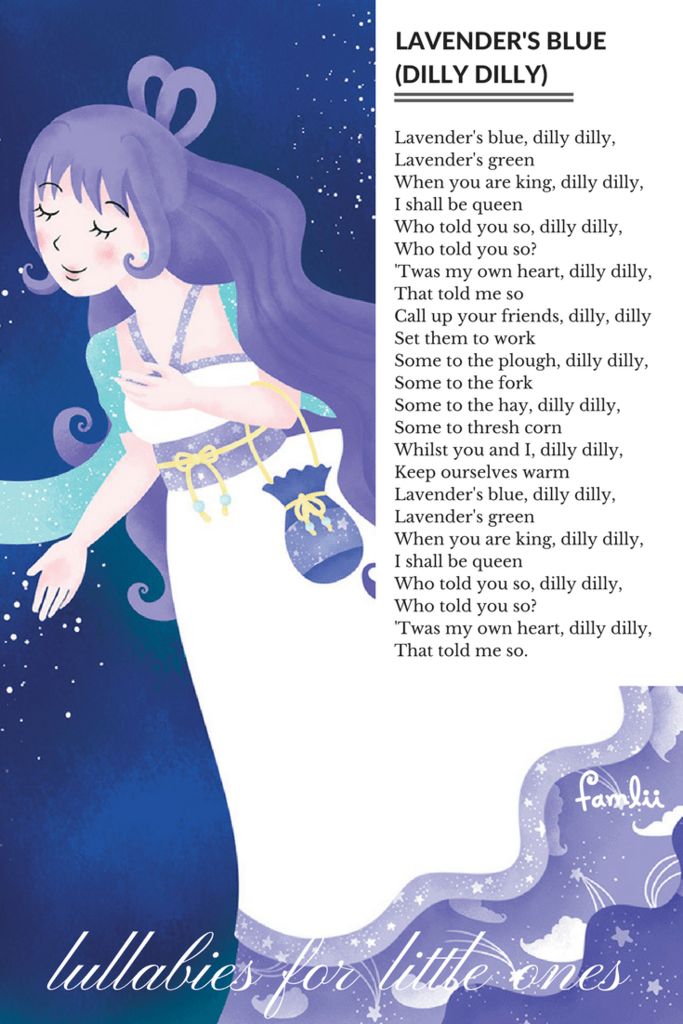 History of the Lullaby Dilly Dilly

Lavender’s Blue originated as an English Folk Song popular in the 16th and 17th centuries. The song was particularly popular in Australia and throughout the United Kingdom, appearing in numerous folk song and nursery rhyme books.

The earliest known version of the song was titled Diddle Diddle, Or The Kind Country Lovers. The original lyrics were set to a pre-existing tune of “Lavender Green”.

A first popular version of the song, titled Lavender Blue, was performed by Burl Ives  in the 1949 Walt Disney film So Dear to My Heart.

There have been numerous renditions of the song to appear on the Billboard music charts, including those by Sammy Kaye, Dinah Shore, and even a doo-woop version by Sammy Turner which reached #5 on the charts in 1959.

Lavender’s Blue gained most recent popularity in 2015 as performed by Lily James and Hayley Atwell in Walt Disney’s live-action film version of Cinderella.

The song is sung to Cinderella by her real mother when she is a child, and later by adult Cinderella after her stepmother locks her in her room.

Lavender Blue as Originally Performed for Disney by Burl Ives

The original version of Lavender’s Blue was titled Diddle Diddle, Or The Kind Country Lovers, which was rather bawdy and risqué, telling of a love story, filled with lyrics of drinking and sexual exploits.

Lavender blue and Rosemary green,
When I am king you shall be queen;
Call up my maids at four o’clock,
Some to the wheel and some to the rock;
Some to make hay and some to shear corn,
And you and I will keep the bed warm.