Little Things poem is an inspirational poem about the value of living in the moment and about the power of small acts of kindness. Written in the 18th century by Julia Carney, the poem tells how little things change the world, and how each little effort matters.

Little drops of water
Little grains of sand,
Make the mighty ocean,
And the pleasant land.

So the little moments,
Humble though they be,
Make the mighty ages
Of eternity.

So our little errors
Lead the soul away
From the path of virtue,
Far in sin to stray.

Little deeds of kindness,
Little words of love,
Make our earth happy,
Like the Heaven above. 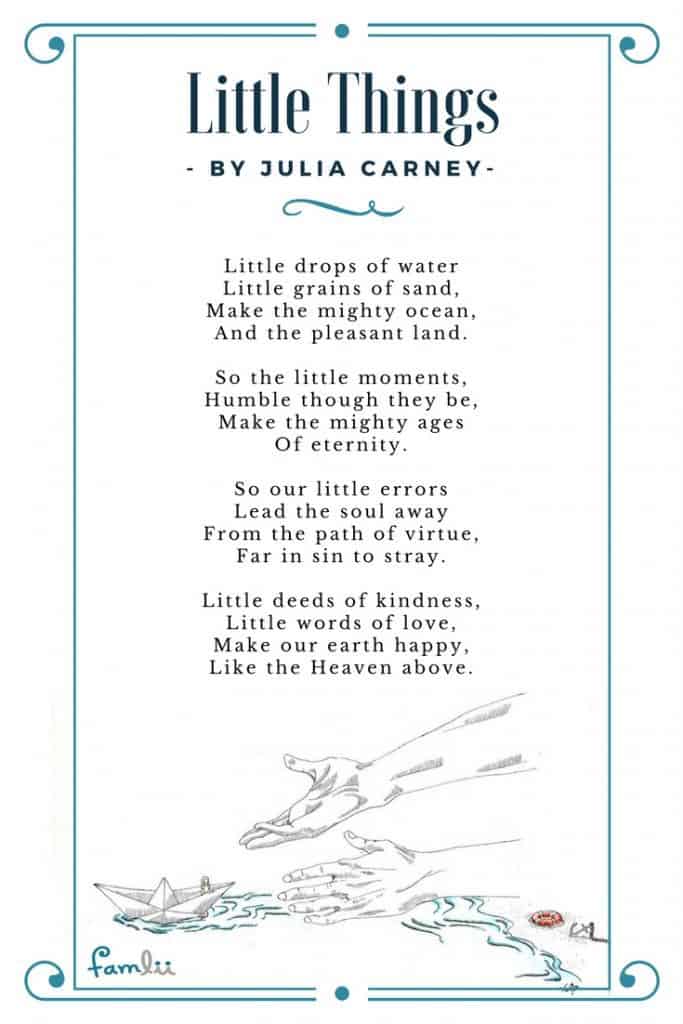 Numerous parodies of the poem have been published, most notably the following poem by Burgess:

History of the Little Things Poem During an impromptu classroom assessment in Boston, Julia Carney composed the first stanza of the poem on a blackboard in only ten minutes.

Little Things became so popular Carney was asked to write additional stanzas, composing an additional three, which make the final poem.  The verse was recited in Sunday school classrooms and re-written for singing in church hymnals.

In the book Poems that Every Child Should Know published in 1904, authorship was erroneously given to the Reverend Ebenezer Brewer, although the poem had actually been written by Julia Carney many years earlier.

What is the hymn Little Drops of Water, Little Grains of Sand?

The poem Little Things is published in numerous hymnals under the song title Little Drops of Water, typically set to a tune composed by Rhodes.

The hymn was also published under various titles including – Infant’s Prayer and Little Drops. Various verses were added by different authors, including the following hymn stanzas:

Little ones in glory,
Swell the angels song.
Make us meet, dear Savior,
For their Holy throng.

Julia Carney is reported to have disliked this change, preferring happy to Eden, most likely as a reverence to Eden, though one can also speculate, she believed in caring for the Earth; hence her choice of the word happy.