One for Sorrow is a classic children’s nursery rhyme about magpie birds. According to folklore, counting the number of magpies (or crows) which appear at a joyous occasion, such as a baby shower or wedding, is thought to foretell the fortune a couple. If multiple magpies appear, it’s a sign of good luck!

In the version of the poem below, one for sorrow refers to the loneliness of being single before marriage, with two for joy referring to the happiness of becoming a couple.

Five or six magpies, both foretell the future wealth of a family, with seven being a bittersweet twist, eluding to the secrets all families must hold to maintain lifelong love.

Eight and nine magpies refer to always being hopeful and loving, with ten magpies encouraging everyone to ultimately follow their own path in life by pursuing the unexpected opportunities which appear — the bird you must not miss!

What is the Nursery Rhyme One for Sorrow?

One for sorrow,
Two for joy,
Three for a girl,
Four for a boy,
Five for silver,
Six for gold,
Seven for a secret,
Never to be told.
Eight for a wish,
Nine for a kiss,
Ten for a bird,
You must not miss.

How Does the Poem Predict a Baby’s Gender?

Counting the number of magpies appearing at a family event, particularly when a woman is already pregnant, foretells whether a couple’s child will be a girl or a boy.

If birds appear, count them — three for a girl, and four for a boy!

A magpie theme makes a lovely gender reveal cake at a baby shower, or even a chic black and white theme for a wedding.

One for Sorrow ~ The Magpie Poem 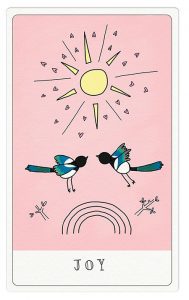 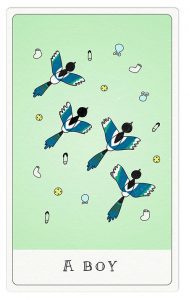 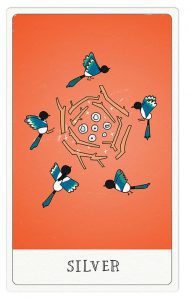 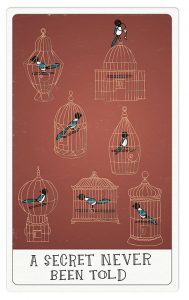 7 for a Secret
Never Been Told

‘Casting shadows on the winter sky as you stood there counting crows.’ – The Counting Crows

Is There a Magpie Song?

Fun Fact:  The 1990s band Counting Crows featured a version of the nursery rhyme in their hit song Murder of One.  This crow version of the poem was the inspiration for the music group’s name. Are Magpies Good or Bad Luck?

That depends on whether you are an optimist, or a pessimist!  Magpies were traditionally viewed as a bad omen, mostly based on superstitions and old folk tales.

Their appearance foretold the coming of evil. These sad versions of the poem from the 1780s are based on the cycle of life, with the meaning that everyone eventually succumbs to sorrow and woe.

Like crows, the appearance of magpies was viewed as an omen of death because these birds are scavengers, coming to feast on dead bodies of other small animals. Magpies were thought to gather in groups above areas where animals were expected to soon die.

What are the Dark, Sorrowful Versions of the Magpie Poem?

One for sorrow,
Two for mirth,
Three’s a wedding,
Four’s a birth,
Five is Heaven,
Six is Hell,
Seven is the Devil himself.

And a slightly different sorrowful variation,

One for sorrow,
Two for mirth.
Three for a funeral,
Four for birth.
Five for heaven.
Six for hell.
Seven for the Devil, his own self.

The more happy, positive versions of the poem evolved over the centuries, when bird lovers began admiring magpies for their beauty, resourcefulness, and intelligence.

But even the sorrowful versions are lovely, as both sorrow and joy are what make life so meaningful.

What is the Fortune Telling rhyme for Counting Crows?

Similar to counting magpies, counting crows is a traditional superstition for fortune telling.

What Animal is Your Child? Find Their Chinese Zodiac Sign