A parent’s song of protection and responsibility, Suo Gan, is a traditional Welsh lullaby, or “lull song”, from the title’s translation (suo = lull; gân = song).

Here are the lovely lyrics for Suo Gan, and hint:  it’s pronounced something like, see-oh-gan, with the gan rhyming with can.

Angels hover,
Ever nearer,
Looking on your
Smiling face.

I will hold you,
Close enfold you
Close your eyes now
Go to sleep.

Lovely darling,
I will guard you
Keep you from all
Woe and harm.

Slowly, gently,
I will rock you,
Resting sweetly,
On my arm.

May you slumber,
E’er so softly,
Dream of visions
Wondrous fair.

I will hold you,
Close enfold you.
Close your eyes now
Go to sleep.

May you slumber,
E’er so softly,
Dream of visions
Wondrous fair.

I will hold you,
Close enfold you.
Close your eyes now,
Go to sleep. 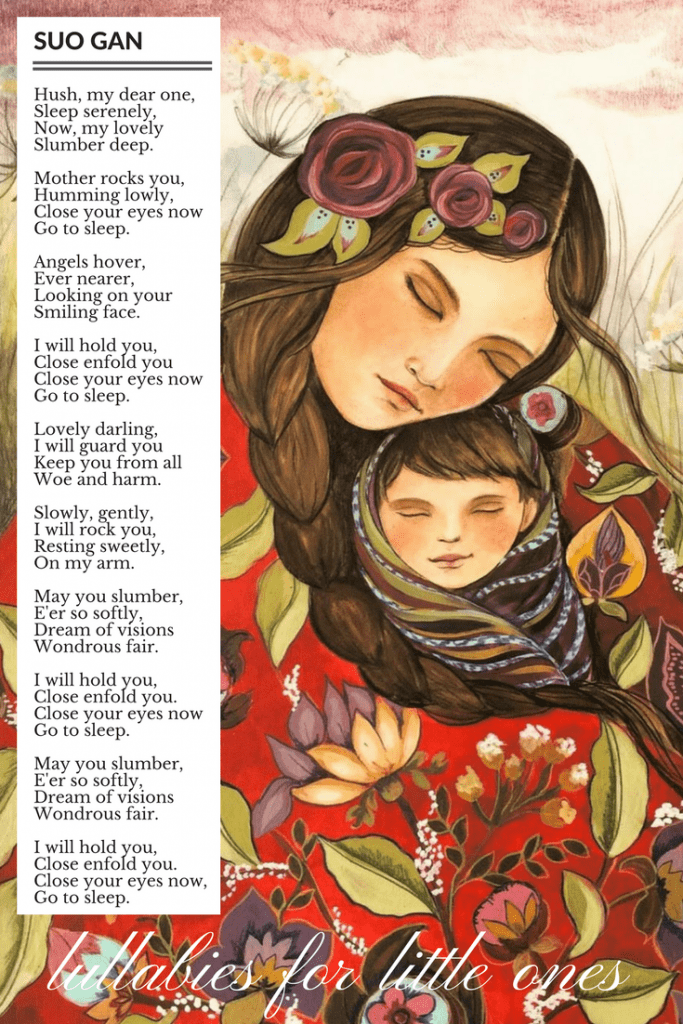 Suo Gân was written by an anonymous composer in Wales sometime during the early 1800s. The song lyrics were first recorded much later, by the Welsh folklorist Robert Bryan (1858–1920).

In Stephen Spielberg’s 1987 film Empire of the Sun, the song was featured predominately in pivotal scenes. The movie tells the story of young boy named Jim who becomes a prisoner of war and sings Suo Gan in a Japanese internment camp during World War II.

Numerous vocal and choral recordings have been made of the song, most notably by Charlotte Church, The Vienna Boys Choir, and the Irish Tenors.

Suo Gân is also a religious Welsh carol and is featured predominately in hymnals and during Christmas music performances. The Orff-Schulwerk Music for Children book contains the following verses for the carol:

English Translation of the Traditional Welsh

Sleep child upon my bosom,
It is cosy and warm;
Mother’s arms are tight around you,
A mother’s love is in my breast;
Nothing shall disturb your slumber,
Nobody will do you harm;
Sleep in peace, dear child,
Sleep quietly on your mother’s breast.

Sleep peacefully tonight, sleep;
Gently sleep, my lovely;
Why are you now smiling,
Smiling gently in your sleep?
Are angels above smiling on you,
As you smile cheerfully,
Smiling back and sleeping,
Sleeping quietly on my breast?

Do not fear, it is nothing but a leaf
Beating, beating on the door;
Do not fear, only a small wave
Murmurs, murmurs on the seashore;
Sleep child, there’s nothing here
Nothing to give you fright;
Smile quietly in my bosom,
On the blessed angels yonder.