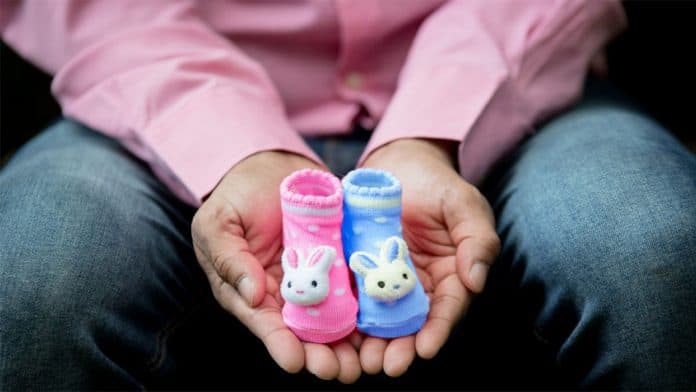 Pregnant moms have tried to guess the gender of their babies for centuries.  Here’s a few of the most common old wives tales about gender prediction — and we’ve included a little science regarding the background of the myths.

And, absolutely:  these predictions are accurate…precisely 50% of the time, statistically speaking, of course!
[sc: inlinead]

Before you read the wives tales below, take the quiz!!!

Pregnant women may have cravings for a particular food or dish, while others suddenly avoid foods they used to love. Food cravings and aversions usually begin at the end of the first trimester, intensify during the second trimester, and then typically go away in the later months of pregnancy.

Despite the myth, the sex of the baby has no effect on cravings.

The legend of the myth is that girls nestle close to a mother’s heart, while boys, typically a little heavier at weight, nestle near the bottom.  But alas, it’s really the mom, not the gender, that determines how she carries.

How a woman’s body changes during pregnancy varies tremendously based on several factors, most notably, the body type of the woman before she became pregnant.  Some woman have wide hips, some skinny, some long torso, etc.

How a woman carries the baby during pregnancy is dependent upon her own body’s changes, not the sex of her baby.

One of the most famous food myths of pregnancy: a woman carrying a girl can eat vast amounts of garlic, but not reek of the odor.  As the legend goes, the sweetness of girls counteracts the garlic’s pungency.

The party game at almost every baby shower:  Tie the wedding ring to a string, and hang it above mom’s belly.  If it swings in a circle, it’s a girl; if it goes, side-to-side, it’s a boy.

As the old wives tale goes, woman who experience severe morning sickness are said to be carrying a girl.

Well, 80-90% of woman experience morning sickness, and who is to define what ‘severe’ means?  Just ask Duchess Kate:  She’s had severe morning sickness with all her children, whether boy or girl!

And every pregnancy is different:  when you are pregnant with a second child, you are older, and your body responds differently.

Sometimes this means second pregnancies are more severe, and sometimes less.  But there is no correlation with the gender of the baby.

A fast heartbeat above 140 beats per minute on ultrasound is thought to indicate a girl. However, it’s really the blood sugar levels of the mother, during the ultrasound, that really make baby’s heart flutter!

If a pregnant woman looks in a mirror, and sees dilated pupils, the myth goes that she’s carry a boy.  Science dictates that it’s really dependent upon the lighting in the room!

Girls are said to steal momma’s good looks, so looking terrible means it’s a girl.  And flowing hair, with a sunny complexion are boy vibes.

Hormonal changes during pregnancy do make hair grow and/or acne breakout. But once again, the gender of the baby isn’t the cause.

If your hubby is gaining sympathy weight, it’s a sign it’s a girl.

10Line on Your Belly?

Some pregnant women develop a dark line across their belly during pregnancy, known as the linea nigra.  The wives’ tale goes that a long line extending above the bellybutton indicates a boy, while a short line below the navel is a girl.

Although it can show earlier, the line typically appears around the 5th month of pregnancy, and is due to melanocyte-stimulating hormone created by the placenta.  This same hormone also darkens nipples, but has nothing to do with the gender of the baby.

Mood swings are common during pregnancy, but those really moody moms-to-be are thought to be carrying girls. We think this has something to do with the drama stereotyping of women — but there are plenty of moody dads and boys out there too!

Every pregnant woman struggles to adjust to the new motions of her expanding body.  Some moms adjust better than others, but clumsiness is a totally normal part of pregnancy, regardless of whether you are carrying a girl or boy.  So take it slow, and enjoy the roses!

If the mother’s Chinese date of birth and the lunar month of conception both are odd or even numbers, you are having a girl. Its a boy if one lunar date is odd and the other even. Sounds crazy, but you can give it try!

Try out the old wives tales of gender prediction for yourself!  Fill out our worksheet of pregnancy symptoms, and ask your friends and family as well.  Add up the totals, and voila!, you can predict your baby’s gender — with 50% accuracy! 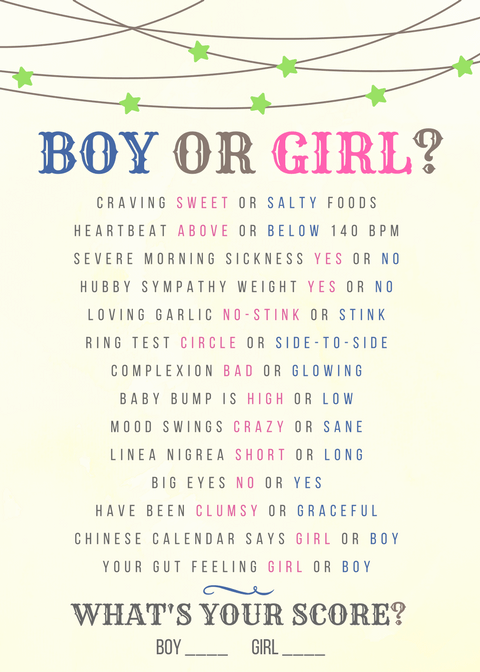 Have Scientists Tested The Old Wives Tales of Gender Predication?

Yes! In 1999, The Johns Hopkins School of Public Health asked 104 pregnant women to predict the gender of their babies, using their preferred method  — the ring test, other myths, or dreams and wild-hunches.

The women had a 55 percent success rate, which is the same as taking a wild guess.  The surprise finding of the study:  highly educated moms were right 71% of the time, a result that was attributed to the small size of the study

So why do pregnant moms keep doing it? Partly because the fun is in the guessing, maybe it’s wishful thinking. Psychological studies have shown pregnant women are more likely to listen to the opinions of their friends and family than to medical advice.

Perhaps this is why old wives tales about gender prediction endure forever.